The Uncertainty of Passion

"A fantastic evening of original music. We really enjoyed the whole experience." C.H

"And now for something completely different. I'm a sucker for accordion bands, but when they've got a truly unusual female voice like
​Anne De Lima's, I'm spoilt indeed."  ​Gig UK Magazine

The UNCERTAINTY of PASSION was formed by Jackie Doe together with vocalist Anne De Lima, former singer in the Geisha Girls. Jackie's original compositions reflect her own unique style, influenced by her love of the accordion, her classical upbringing and her enthusiasm for folk, French and Tango music. Jackie's compositions combine strong melodic lines with heartfelt lyrics reflecting scenarios of everyday life.
The band made a short film for Meridian TV featuring Jackie's song The Dance of Love sung by Anne De Lima with Les Calvert of Mungo Jerry fame on bass and Simon Spratley of Nashville Teens on keyboard. ​The "Dance of Love" was filmed by Mark Chapman on location in London and Hungerford and stars the famous tango dancers Mina and Giraldo.
​The Uncertainty of Passion produced a new Christmas single and video My Very Own Roly Poly Father Christmas in 2011 with singer Sara Harvey and Bernie Witen (landlord of The Retreat Pub) as Father Christmas. The band had great fun decorating The Retreat Pub, despite the fact that it was only November, and Bernie and Jane Marsden (landlady) were great sports, going well beyond the call of duty!
​
The Uncertainty Of Passion tells their story in prose and song at The Rising Sun Arts Centre, Reading
As all gigs were cancelled during the Coronavirus lockdown, Jackie and Anne have been busy making a video for The Rising Sun Art Centre's virtual Quilt. Jackie wrote and recorded "A Song of Our Time" which we then filmed (observing self distancing, of course!) in the garden on one of the hottest days of the year. Here's a lovely photo-still from the video which was created as one image moved to another. 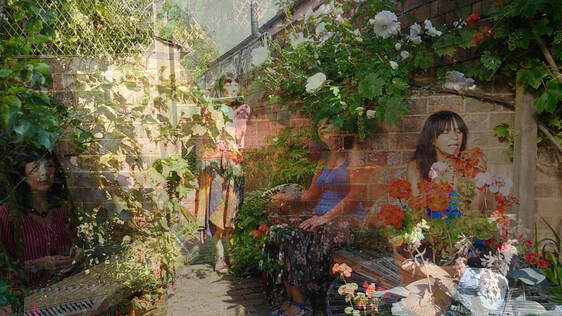